Compare the performance in laboratory tests and cost-effectiveness of AMSOIL Signature Series Synthetic Motor Oil to several passenger-car/light-truck synthetic motor oils widely considered by marketers and con- sumers to be the best available. 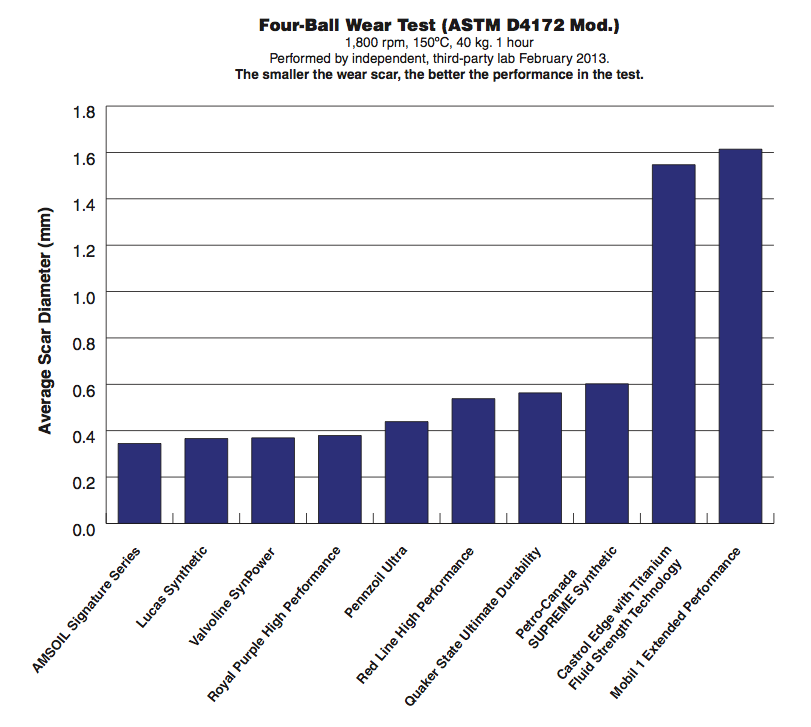 According to the ASTM, the Four-Ball Wear Test can be used to determine the relative wear preventive properties of lubricating fluids in sliding contact under the prescribed test conditions. No attempt has been made to correlate this test with balls in rolling contact. The user of this test method should determine to his own satisfaction whether results of this test procedure correlate with field performance or other bench test machines.

Although not widely used as an engine oil test, the Four-Ball Wear Test provides a means of comparing relative wear-protection properties of lubricating oils. To better differentiate between lubricants, the severity of the test was increased with higher rpm and temperature (the test standard allows for running the test under modified parameters). The size of the scar as a result of the test indicates the level of wear protection the lubricant provides. 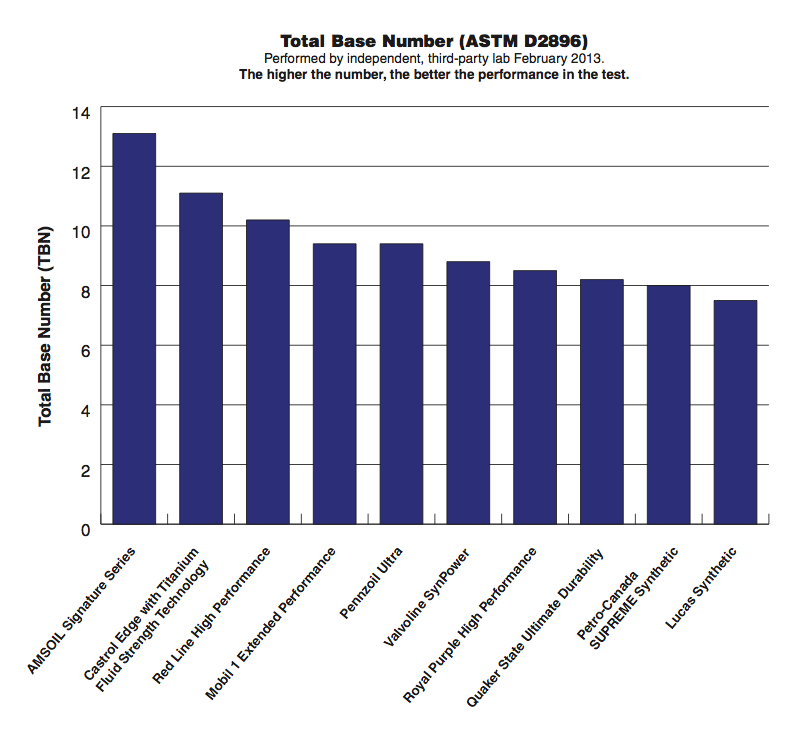 Total Base Number (TBN) is the measure of a lubricant’s reserve alkalinity, which aids in the control of acids formed during the combustion process. TBN can also be used as a measure of lubricant degradation in service. Motor oils that have a high TBN and demonstrate good TBN retention are known to effectively reduce the corrosive effects of acids over an extended period. 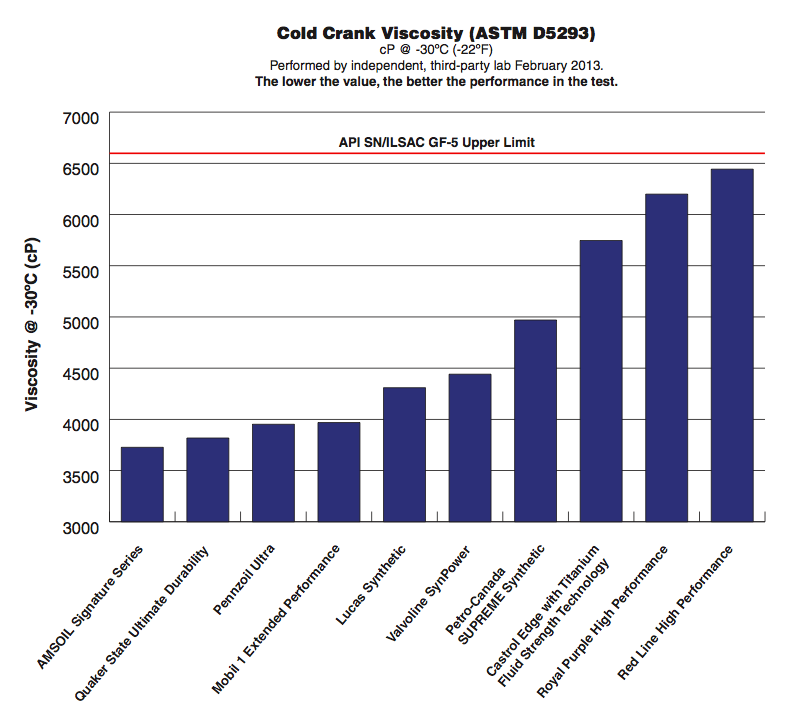 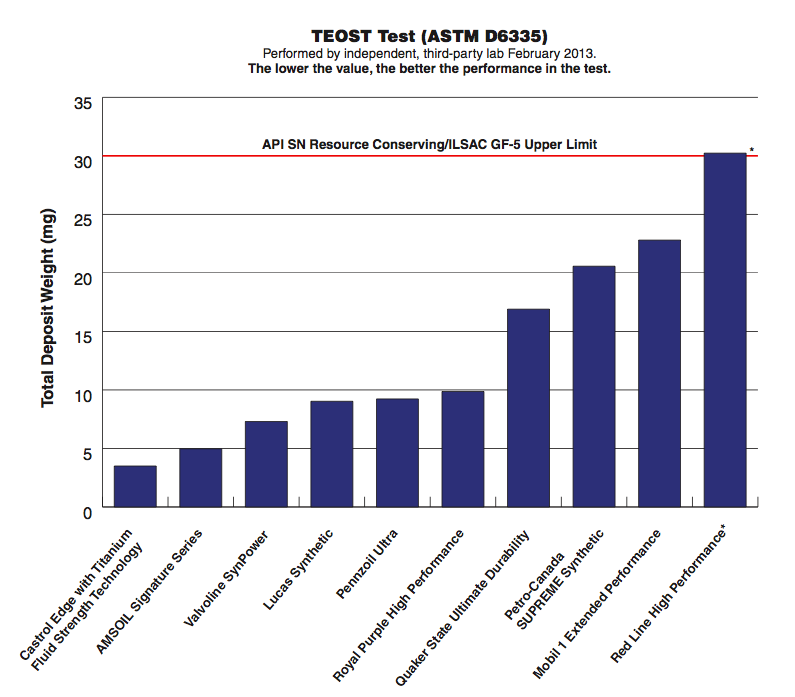 Motor oils can form deposits when exposed to increased heat, reducing efficiency and contributing to poor overall performance. According to the ASTM, the TEOST test method is designed to predict the high temperature deposit forming tendencies of an engine oil.

This test method can be used to screen oil samples or as a quality assurance tool. Given the number of vehicles now equipped with direct fuel injection, turbochargers and other performance-enhancing technologies that increase heat, deposit control has taken on increased importance. To meet the API SN Resource Conserving and ILSAC GF-5 motor oil specifications, a 5W-30 motor oil must limit total deposit formation to 30 mg or less. 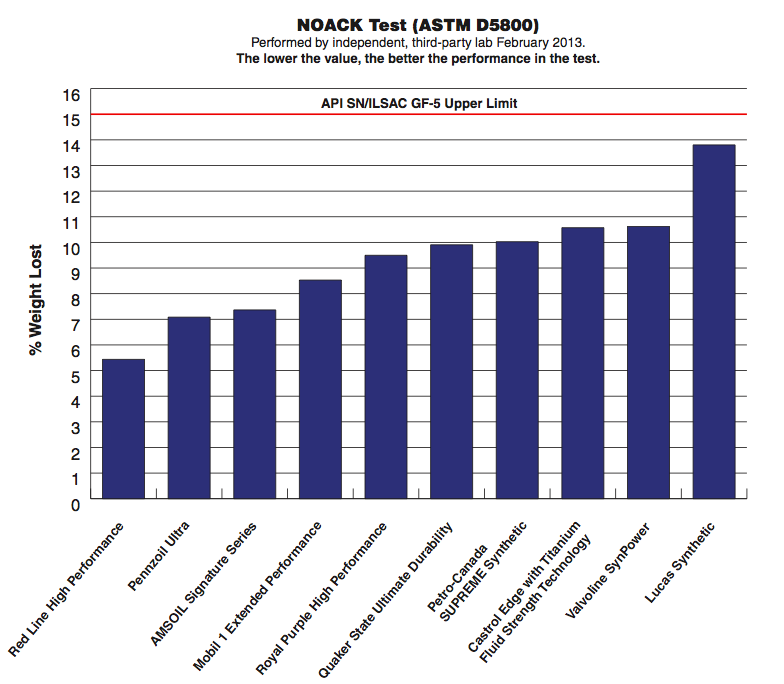 In the NOACK test, a candidate oil is exposed to heat and circulating air. Following 60 minutes, the remaining oil volume is weighed and compared to the original weight, with the difference reported as the percentage of weight lost. Results must be limited to 15 percent or less to meet the API SN and ILSAC GF-5 specifications.

While all oils were below the API SN and ILSAC GF-5 upper limit, results indicate differences in high- temperature volatility. Half of the oils limited the percentage weight lost from volatility to under 10 percent, with AMSOIL Signature Series Synthetic Motor Oil having the third-best result. 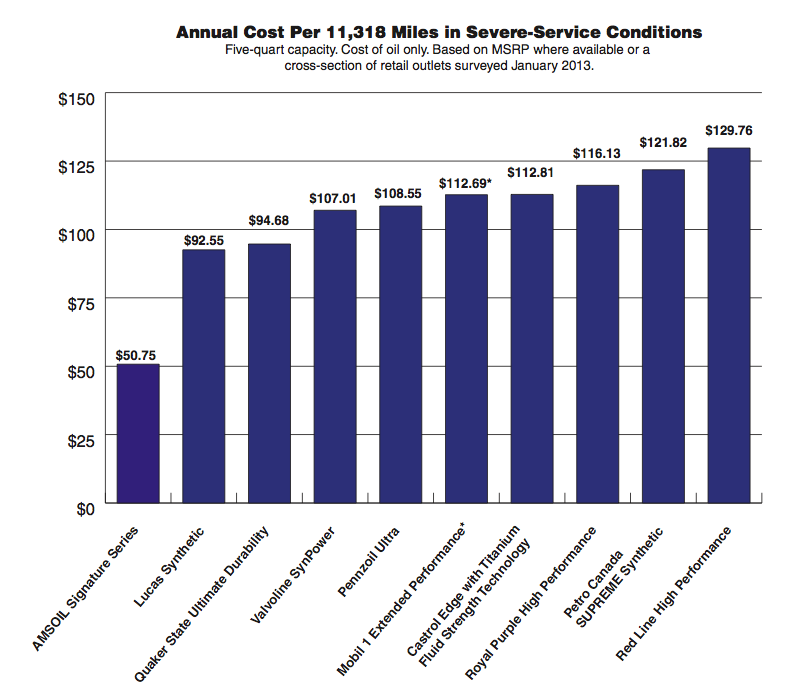 Although AMSOIL Signature Series Synthetic Motor Oil is recommended for 25,000 miles/one year in normal service, light-duty vehicles accumulate an average of 11,318 miles a year and are generally used in driving conditions that fall under the severe service category. For those reasons, overall annual cost is evaluated at 11,318 miles under severe service driving conditions. Signature Series Synthetic Motor Oil carries a drain interval of up to 15,000 miles/one year, whichever comes first, in severe service. Because the other nine oils do not carry a recommended drain interval, a drain interval of 4,777 miles was used, which represents the average drain interval of motorists as reported in the 2012 National Oil & Lube News Operator’s Survey.

Although Mobil 1 Extended Performance is recommended for 15,000 miles in out-of-warranty vehicles in certain driving conditions, its extended drain recommendation does not apply for this evaluation. According to the official statement on the Mobil 1 Extended Performance label, “Extended service is not recommended in severe service applications involving racing and commercial use, frequent towing or hauling, extremely dusty or dirty conditions, or excessive idling.”

Though the retail price per quart of AMSOIL Signature Series Synthetic Motor Oil is initially higher, it provides lower costs compared to the other oils. Overall, Signature Series is the most cost-effective oil.

AMSOIL Signature Series Synthetic Motor Oil ranked first in four of the six comparisons. In contrast, while some oils performed well in a few areas, they did not perform as well in others. Different results from one test to another indicate an emphasis in one area of performance does not correspond to increased performance in other areas of testing. It also reveals the difficulty inherent in formulating a high-quality motor oil that performs well in tests designed to assess optimum engine protection and life.

As engines continue to evolve and demand more from motor oil, the need for premium lubrication becomes more critical. Industry-standard testing performed by an independent, third-party laboratory reveals AMSOIL Signature Series Synthetic Motor Oil to be the overall top-performing oil in these tests. When considering the savings of time and money available due to its 15,000-mile/one-year drain interval in severe service, Signature Series is also the most economical choice.

Reviewed by Eric B.:

I will continue using Castrol Edge Titanium at the recommended 0-W 20 weight because i have direct injection and a turbo, The Castrol Edge is best at lowering carbon deposits and even though I installed an oil catch can I want that protection from carbon buildup. PLUS my dealer and warranty (for Las Vegas, NV) requires a 5,000 mile oil change interval so Castrol edge will handle it well.
I'll get a 30,000 mile interval valve cleaning with BG fluid by my dealer.
BUT, if I can find 0- W20 AMSOIL for less I'll switch.

To use amsoil or not

I just bought a 2019 Mazda cx3 gs and the Mazda dealer uses Petro Canada synthetic. If I was to change oil myself I would not use amsoil even though it handily won the test. Since this vehicle is my wifes car, it will rarely see more than 8,000 km(5,000 miles) per year. Under warranty the oil has to be changed twice yearly and as any synthetic will easily protect in that low mileage, I will go with what I have been using since 1997. That would be Mobile 1 along with their filters. I have a 1996 GMC with over 225,000 km and I change oil once a year with about 9,000 km and it uses no oil between changes. I also have a 2012 Rav 4 that I drive between 7,000-8,000 km per year with annual oil changes. When the oil is checked before changing it is still very clear. If I was a high mileage driver and put 20,000 to 25,000 km per year, I would more than likely use amsoil.

I have seen this test previously but I shall stick with Petro Canada Supreme Synthetic. My Subaru loves it.

Just imagine how much more your Subaru will love a better synthetic like AMSOIL? Replied by Tech Admin

This is the first actual time I have ever examined synthetic motor oils this closely. While I want the very best stuff in my engine it would seem the regard I have had for what I had been using was not correct. Viewing this has been extremely instrumental for my making a more informed decision on what lubricants I need to select the next time I do an oil change or transmission fluid change.

Thanks Perry for taking your time to write this. Lubricants are something people generally fail to research to find the best. It is common to buy them based on advertisements and gut feelings. Only a fraction of the population think about verifying advertisement claims and to see if they have better options. It looks like you have done your homework! Replied by Tech Admin

I didn't just rank them in each test category and then total up the results like the previous poster. Instead I grouped them by penalty points with the best in each test receiving one penalty point and the rest having a multiple penalty total in each test based on the actual graph test value of the best one in each test group. I rounded the penalty multiples to the nearest integer. The only fallacy with my procedure is that it assumes an even weighting for each test category. I am sure someone could come up with a weighted formula for each category that would reflect how each category affects engine longevity. In that case it would be trivial to adjust each penalty in each category to reflect those weightings. That would be the most exact fairest way to have a winner. Even so it is clear that Amsoil is the winner on all methodologies unless the Noack test is so much more important than the others.

I totaled the points for each of the oils and found that Amsoil is about 3 times better then most of the other oils. Not that I was surprised but this really told the story. If you want the best the go with Amsoil. It just can't be beat.