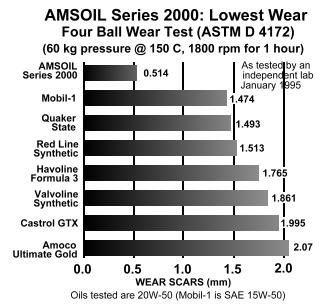 When AMSOIL created the 20W-50 Racing Oil, it seems the competition got upset with the testing results showing it's better protection. For years Red Line advertised that they provided the best protection, but the results of the Four Ball Wear Test showed the AMSOIL Series 2000 20W-50 providing over twice the protection.

Red Line decided that they would perform their own test by running both oils and then seeing what results they would come up with. Their results some how showed their oil to be better. In an attempt to discourage the promotion of AMSOIL they mailed this information to all AMSOIL Dealers as well as their own reps.

The findings of the Four Ball Wear Test were that of 100 tests and coming up with an average. Unlike the Red Line test, it could be proved over and over, under proper testing conditions. Rather than going along with the hype that this action provoked, AMSOIL issued the following letter:

The article, however, goes on to report results of used oil testing using the ASTM D4172 Test. ASTM tests, as any informed entity in the lubricants industry knows, are designed for use with new (unused) lubricants, not used oil.

There are two problems with testing used oil. First, the conditions of testing are uncontrollable. While Red Line states the service conditions under which the samples operated were the same, variables including fuel and glycol dilution, contaminant levels, filtration, driving conditions sampling techniques and many more are virtually impossible to control.

The second problem is repeatability. AMSOIL attempted to replicate Red Line's findings by testing samples of used oil. The results were inconsistent with Red Line's and failed to meet the repeatability requirements of the ASTM D4172 test method. This failure is the result of testing an oil along with its contaminants.

Red Line's claim that their oil is designed to become more effective as it reacts with blowby gases is absurd. Clearly, if blowby gases improved the anti-wear characteristics of lubricants, then lubricant manufacturers would expose their products to such gases during the manufacturing process. The fact is, lubricant performance should not depend on the uncontrollable reactions of blowby gases with the oil.

When all the appropriate, scientifically valid, repeatable tests are applied Series 2000 is clearly the better oil.

Of course, AMSOIL Dealers are much too educated on the technical aspect of lubrication and on the principles of ethical salesmanship to be swayed by unscientific and unprofessional marketing tactics. And as the documented histories of vehicles achieving oil drain intervals greater than 100,000 miles under the Trigard Program continue to mount, dealers are assured that AMSOIL motor oils remain the standard by which other oils are measured. 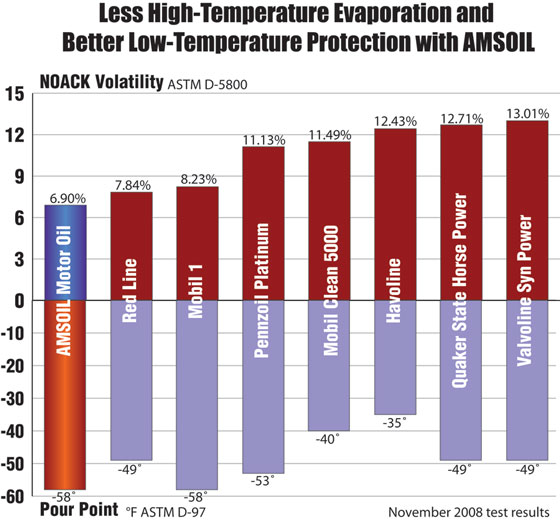