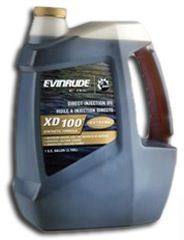 Evinrude® E-TEC™ marine engines are unique in that they offer an alternative, lean-mix setting that allows the engine to use less oil. Whether programmed to operate at the standard mix ratio or reprogrammed to the lean-mix setting, E-TEC engines use sophisticated electronic equipment to monitor conditions, including rpm and throttle position, to determine the appropriate gas-to-oil mixture. To use the lean-mix setting, however, customers must have their engines reprogrammed by an Evinrude dealer and agree to use Evinrude XD100™ oil exclusively, often at a higher cost compared to other oils. Bombardier Recreational Products (BRP®), the manufacturer of Evinrude E-TEC engines, has not established a performance specification against which to qualify other oils.

Both Evinrude 250 hp E-TEC engines used in the study were initially operated on the standard oil injection setting for 28 hours. An Evinrude dealer then reprogrammed both engines to operate on the lean-mix setting for the duration of the study. The starboard engine's oil reservoir was filled with AMSOIL HP Marine Synthetic 2-Stroke Oil, the portside engine's oil reservoir with Evinrude XD100 2-Cycle Oil.

The validation period lasted a total of 534 hours; approximately 240 hours were spent under severe-service conditions when the SEA-TOW boat towed marine vessels. The engines were closely monitored for the duration, and upon completion, both were disassembled and rated by a calibrated ASTM rater who evaluated each engine based on NMMA TC-W3 criteria for two-cycle marine engines. Merit ratings for each set of components (e.g. piston skirts, piston rings, etc.) were determined using the appropriate techniques and rating scales as defined in the Coordinating Research Council, Inc. Deposit Rating Manual No. 20.

AMSOIL fully supports the use of HP Marine™ as a replacement for Evinrude XD100 in Evinrude E-TEC™ engines, and warrants its use according to the AMSOIL Limited Liability Warranty (G1363). 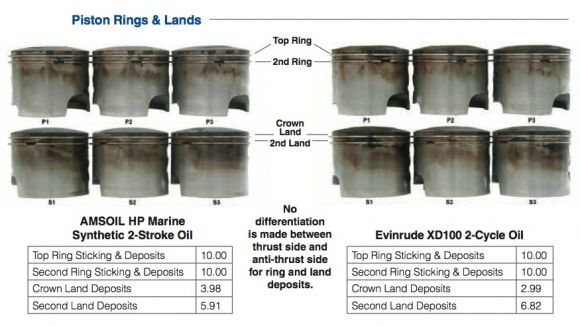 Deposits on the piston rings can cause ring sticking and consequent power loss. The top rings and second rings in both engines earned perfect merit ratings of 10.00, demonstrating no piston ring deposits. Merit ratings for crown land and second land deposits were similar for both engines. 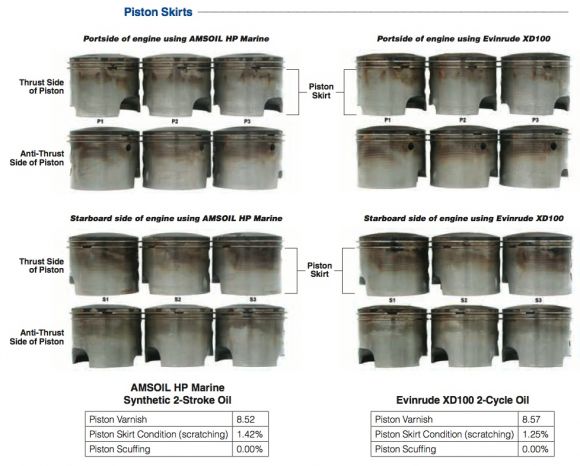 Scratching refers to the alteration of the skirt surface in the form of sharp linear depressions from lapping of mating surfaces by fine particles suspended in the lubricant, fuel, air or imbedded in a surface, while scuffing appears as a matte finish. The presence of scuffing is commonly lubricant-related. In both engines, scratching was present at trace to very light levels, represented by the low percentage ratings. Both oils completely prevented piston skirt scuffing, earning perfect ratings of 0.00 percent scuffing. 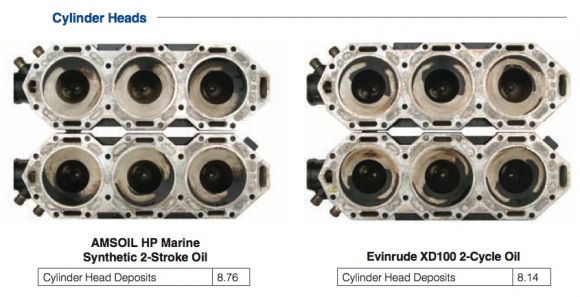 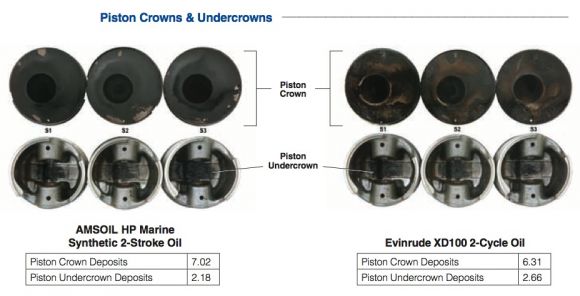 Connecting rod assembly components are exposed to elevated temperatures and pressures that can rupture the oil film, leading to metal-to-metal contact and wear. The wristpins, crankpin rod bearings and wristpin rod bearings in both engines demonstrated trace to light levels of wear and were found to be in "good" condition according to the calibrated ASTM rater. Deposits on all components were limited to levels not adversely affecting performance.

The wristpin and crankpin bearing races undergo constant rotational stress, inviting wear. Bearing races in both engines demonstrated trace to light levels of wear and were found to be in "good" condition according to the calibrated ASTM rater. Deposits were limited to low levels in both engines.

Carbon deposit buildup in the exhaust ports restricts air flow and can cause reduced power and poor overall performance. Both engines displayed virtually no exhaust port blocking, represented by the low percentages. Deposits were likewise minimal, with ratings near perfect 10s.

In the area of cylinder bore scuffing, both oils limited metal-to-metal contact and achieved perfect scores of0.00 percent. The cross-hatch pattern remains visible on the cylinder walls of both engines. 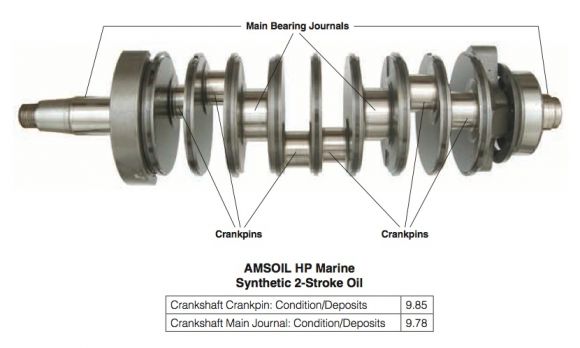 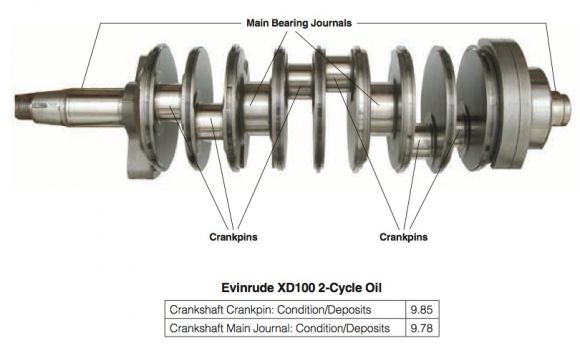 The crankpins and main bearing journals experience elevated pressures during operation and represent common suffering points. In both engines, the crankpins and main bearing journals demonstrated trace to light wear and were found to be in "good" condition according to the calibrated ASTM rater. Ratings for deposits were nearly perfect for both engines.

The main bearings experience intense pressure and represent a common area where metal-to-metal contact can occur. Both oils limited wear to trace to light levels and the bearings were found to be in "good" condition according to the calibrated ASTM rater. Both oils nearly eliminated deposits as well.

I've been using Amsoil HP in my 300 hp evinrude G2 runs like champ.

I wish I had the balls to run this as alternative oil in my Etec 200 HO as the cost of XP/XPS 100 goes up every year!